Today we will look at a solving technique for Non-Consecutive Sudoku. The images below are for explanatory purposes only and not an actual puzzle. 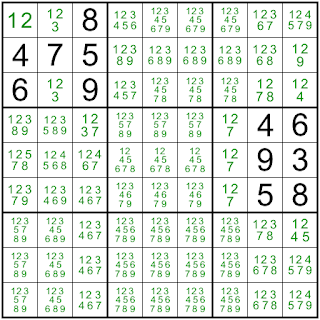 Let us take a look at box 1 in the above example. We have pencil marks of 1,2 at R1C1. 1,2,3 at R1C2 and 1,2,3 at R3C2. In a Non-Consecutive sudoku, whenever we have consecutive numbers as pencil marks in a cell, then we can simply remove them from the adjacent cells. For example, if R1C2 was 1, then R1C1 would become 2, and if R1C2 was 2 then R1C1 would be 1. Since either scenario is not allowed in a Non-Consecutive sudoku, we can safely eliminate 1 and 2 from R1C2. 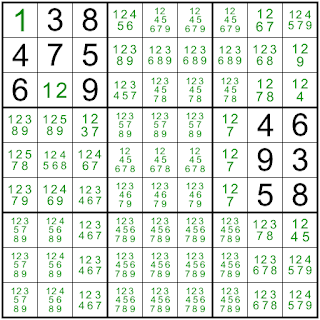 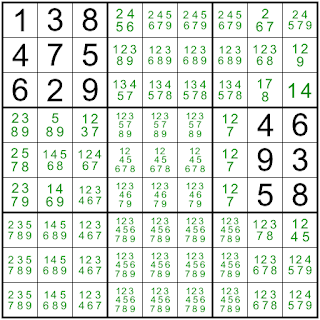 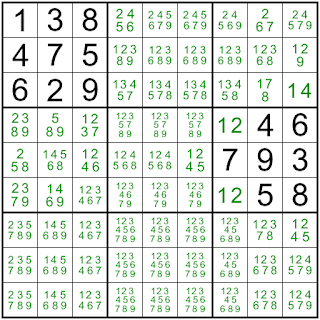 Variant 9 has started at Sudokucup. The Variant is Non-Consecutive Anti-Knight.

Rules of classic Sudoku apply, consecutive numbers cannot be in adjacent cells and same number cannot be at a knights step.

This is a puzzle created by me. Hope you all like it.
The link is here.
If you want to practice before you attempt the variant at Sudokucup, then u can try out the puzzle on this blog here.
Posted by Rishi Puri No comments:

Email ThisBlogThis!Share to TwitterShare to FacebookShare to Pinterest
Labels: Competitions

On 8th/9th January 2011, LogicMastersIndia will be holding a Puzzle Contest named Puzzle Jackpot. This contest is created by Serkan Yurekli of Turkey.  He is the editor of Akil Oyunlari puzzle magazine and they have published several books including logic puzzles.


The test is of 2 hours duration and can be started anytime during the weekend of 8th and 9th January 2011. Your timer will start once you click on the "Start Puzzle Jackpot" button on the LMI website. You will also have a 5 minute grace period for answer submission. A Timer will be on once you start the test. Once your time has run out you will not be allowed to enter any answers.


The puzzle types are :

The IB can be downloaded here.
The Puzzle booklet of 16 pages has been uploaded. You can download the puzzle booklet here.
Further discussions on this contest is at the LMI Website