Today is a variation of Killer Sudoku that I first made for my test at LMI. It is a Coded Killer.

Rules of classic sudoku apply. Additionally, the grid is divided into small cages with numbers on top left of the cage. These numbers denote the sum of the digits inside the cage. Digits do not repeat inside a cage. This is the basic rule of a killer sudoku.

In this coded Killer Sudoku, the digits 0 to 9 have been replaced by the letters A to J, in random order. Each letter denotes exactly one digit. You have to determine which letter corresponds to which digit and after determining all the letter and corresponding digits, solve the killer sudoku. 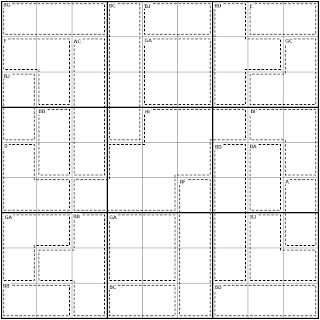