Todays puzzle is an Inequality Sudoku, also known as Greater-than Sudoku. From today I will also be mentioning the difficulty level of the puzzle so that solver can have an idea as to how fast/slow they have solved it.

Rules of classic sudoku apply. Additionally, numbers in the 3x3 boxes follow the mathematical pattern of greater than or less than depending on the symbol between the two cells. This puzzle is of Easy difficulty level. 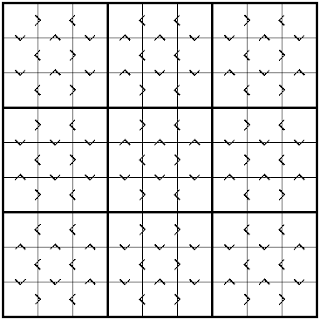 For Solution Click Here.
Posted by Rishi Puri No comments: