It has been a one hell of a tiring week. Too much of travelling and sudoku creation for a few championships. I am packing my bags for another bit of travel as I get ready to upload this puzzle. This Little Killer Sudoku serves the Daily League at FB as well as practice for the WPF GP that takes place this weekend on the German website.

At the Daily league wed had a wonderful start with an Equal Sudoku by Cristoph. A very well made sudoku. Tuesday was Prasanna's turn with a Between 1 and 9 sudoku which was again very well made with only two given hints. Wednesday was Bastien's Fortress Sudoku.

For the Little Killer, apply standard sudoku rules. Additionally, digits outside the grid denote the sum of all digits in the corresponding direction of the arrow. 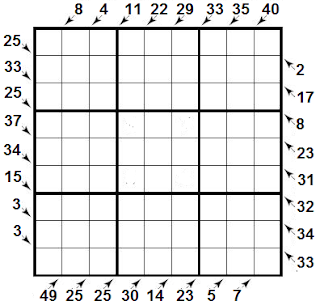