This Kropki sudoku was created by me for the Sudoku Mania contest that was held at the UKPA.

Rules of classic sudoku apply. Place numbers in the grid such that each row, column and 3x3 box contain the numbers 1 to 9. If the absolute difference between two digits in neighbouring cells equals 1, then they're separated by a white dot. If the digit in a cell is half of the digit in a neighbouring cell, then they're separated by a black dot. The dot staying between '1' and '2' can have any of these dots. 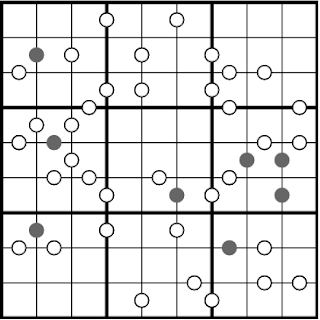