Today We have a Toroidal Non-Consecutive Sudoku. 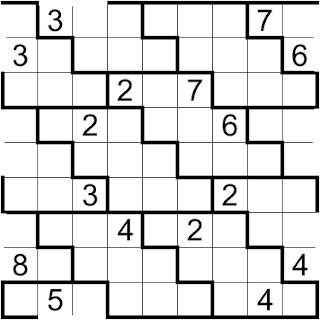 To kick of posts for 2019 I decided to try out unusual shapes. To begin with we have an easy Expanded Sudoku. Place digits 1 - 9 in each 3x3 boldly outlined boxes. Digits do not repeat along any extended row or column. 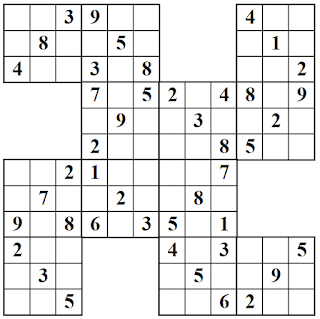 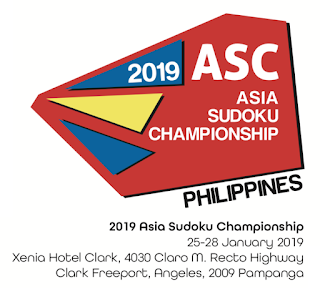 The journey to the Asian Sudoku Championship 2019 began in October 2018, when my boys had mastered Classic Sudokus. Since they had shown an interest in sudokus, I introduced them to variants in November. They slowly started picking up all the basic variants and since ASC is the only championship that has age categories, the boys were eager to take part. Their only question was "Do we get to wear India T-shirts?"

So with 2 months of practicing variants the boys were set. Coincidentally no one apart from Rohan and Prasanna were participating so I decided to join the Indian senior team. 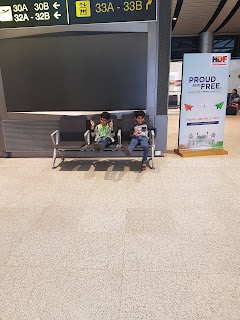 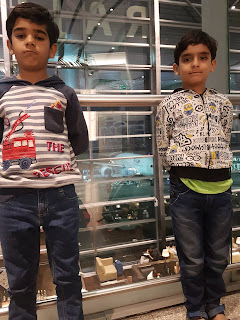 The kids were excited for their first ever Sudoku Competition and the immigration person was kind enough to wish the kids good luck to us especially the kids. We landed at Manila and took a cab to Clarks which is about a 100 KM ride. We reached around 4 PM, tired and jet lagged. We came to know that the opening ceremony was at 6 PM and kids had to wear the traditional dresses. We were at the table. Japan team had arrived along with us and the kids were excited to meet Kota, 4 time World Sudoku Champion. They were meeting a World Champ a second time (They had met Tiit in Hyderabad in 2017).

The huge contingent of China and Philippines and just 2 kids from India. People were intrigued by seeing juniors from India for the first time and the boys and the Chinese contingent hit off pretty well. Prasanna and Rohan were supposed to land at 7 PM so the team photo turned into a family photo op for team India, with just me and the kids. Every country's contingent wanted pics with the boys. 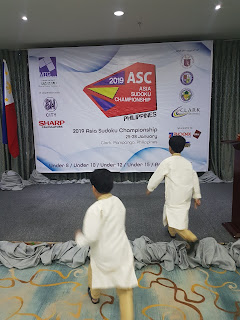 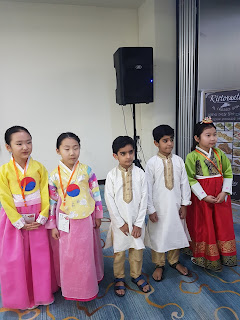 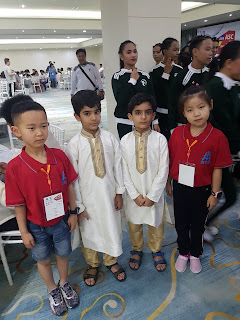 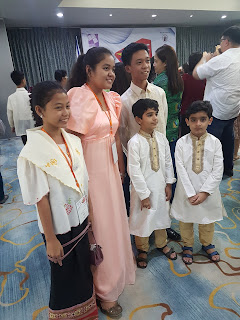 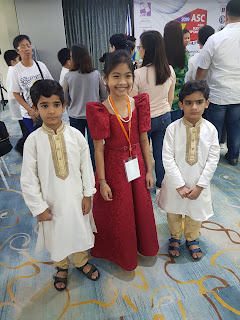 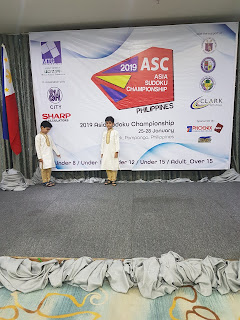 There was a meeting scheduled for all team reps after dinner. Since Prasanna had not reached I was asked to attend it. Having no clue what to do, I was grateful to see Rohan and Prasanna saunter in and I gleefully pushed Prasanna to the meeting. The kids hit off instantly with Rohan and Rohan found 2 new fans. Oh and we finally got to see the IB with points aallocation at Dinner time!!!

In the room we discussed on how do we complete our senior team. My wife was supposed to travel with us and would have been a nominal 4th member but her official visit to US got extended and she could not be there in Manila. We first thought of putting up 1 of the kids as the 4th member, but during the team rep meeting the organisers agreed to Prasanna's proposal that Team India will play handicapped with 3 players and the kids can focus on their age category puzzles.

The competition was supposed to start at 10 AM as per schedule so we sauntered into the breakfast fast at 8 30 AM. We then realised that the start had been rescheduled to 9 AM so we hurriedly ate what we could and rushed to the competition hall. Now I was completely focussed on the boys and was not even thinking about the senior individual rounds. Having been an occasional participant in sudoku events, I was neither mentally nor actually in a competitive mode. Round 1 was of 45 minutes for all age categories. Within 5 minutes someone said finished for a bonus of 40 minutes. I was not solving but looking at the juniors section to see who had completed the set. The Chinese as usual were the suspects. Imagine my shock when 2 minutes later Veer, in the under 8 age category, raised his hand for a finish. Just 2 minutes behind the Chinese was an exceptional performance for the kid. Rudra , in the under 10 age category, also completed his round with about 15 minutes to spare. I managed to somehow finally have a look at my booklet and solve a few.

Rounds 2 and 3 went on as expected. Kota, Kwak, Rohan, Ken Endo and Prasanna the clear cut top 5 in every round. Tawan and Sinchai from Thailand were also doing a great job and me, I was whiling my time trying to do the best I could in the situation, though my complete attention and focus was on the kids. The kids managed to complete both these rounds with good bonuses and Veer especially hard the the trail of the Chinese kids.

We broke for lunch where The Chinese coaches and I got into discussion on how we train the kids. Post lunch Rounds 4 and 5 took place and the effects on the boys was obvious. They have practiced hard no doubt, but continuous solving for the whole day had started taking a toll on them mentally which was visible on their faces. Round 5 was the only round where Veer did not get a bonus and left blank cells in a couple of puzzles. Like Father Like Son!!!! This eventually cost him a higher position.

Now came the team rounds. The boys were clubbed with a Chinese girl in the junior category. The boys did not even know what the team round was and what kind of puzzles would be there. The blame for this would be on me, as I had focused their entire practice on individual rounds and since India did not have a complete team in the juniors category, I had not bothered to explain the team rounds to them.

So Coming to the team rounds for the Seniors.

There were 5 sudokus to be solved. 4 Capsule Sudokus and 1 Jigsaw Sudoku. 1 3x3 box from each Capsule Sudoku had to be transferred to the Jigsaw Sudoku. Now Rohan, Prasanna and I have been together since 2013 and we have a very good understanding of each others skills and belief in each other. Though Japan was the favourite to win (They had a full team with Kota and Ken Endo, who have a combined 6 world championships between them), we were just planning to have fun and give it our best.

When we saw the grids, we immediately realised that solving the puzzles individually would not be enough. So we placed the Jigsaw sudoku in the middle and started to check for combinations where each Capsule Sudoku would fit. This helped us a lot in identifying the placement of each transferable 3x3 box and in turn provided more clues to solve the Capsule sudokus. We completed the round with 5 minutes to spare for a total of 900 points (800 for the 5 sudokus and 100 points for 5 minute bonus). The only other team to finish the round was the UN team comprising of Thailand and Philippines. After the round while interacting with the Japanese team, we came to know that they had managed to complete only 4 of the 5 sudokus. We felt that assuming all are correct for both our teams, we would have a 260 point lead over them, which amounts to 13 minutes time bonus. Suddenly we felt we had a golden opportunity as long as we complete Round 2 of the team rounds within 12 minutes of the Japanese team. Since the UN teams are never part of official ranking our focus was only on the Japanese team.

This round had 6 sudokus to be solved and these sudokus would form a cube where the edges of 2 sudokus would share the edge and all digits along the edge would be same. We started of cautiously not to mess it up. Japan knew they had a lot of catching up to do and they shot right off the block. They eventually completed it with a mind boggling 15 minutes to spare. I will say we were cautious and not slow as the scores might suggest, since we were the last team to complete the round. We just wanted to ensure that there were no mistakes which would kill our chances, and even if we managed to submit with 3 minutes to spare, we should be on top. Somewhere when10 minutes were remaining and we had just 1 last puzzle to complete. The Non-Consecutive (Actually it was a consecutive sudoku, but since the only consecutive dot was in the given, we treated it as a Non-Consecutive Sudoku). We suddenly noticed that the alignment was not proper to form a cube and we had to restart this one puzzle again by rotating it and identifying the correct edge alignment. Prasanna then found a breakthrough. Rohan and I could not but having faith in your team member is one of the pre-requisites of a team round. We went ahead with Prasanna's proposal and eventually completed it 4:15 remaining on the clock. The person who was collecting the sheets took their own sweet time and they eventually noted down our time as a bonus of 3 minutes.

No results were displayed for either the individual rounds or team rounds that day. Even at midnight when we checked, results only till Round 3 of the Individual rouonds were on board. We were on tenter hooks the whole night because we realised that we could eventually be making history if everything went our way.

Sunday was a day for sight seeing. Clarks had been a US Air Force base. So we went around seeing the history of the place in a 4D theatre. We also visited a make shift village and the kids had a great time shopping and exploring. At lunch we were dropped at SM City Mall, which we learnt would also be the venue for the closing ceremony post lunch. Now food had been a concern for us. We could hardly find proper vegetarian food for ourselves. So the moment we saw a Pizza Hut we all rushed to have a sumptious lunch. 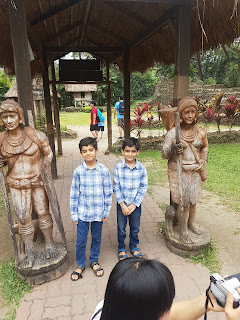 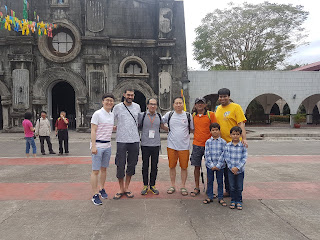 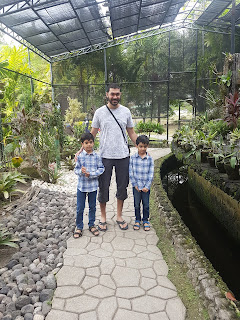 Now I do not even want to go into a discussion about the ranking methodology used. It was Stupid, silly, outlandish and outrageous. The only place where rankings were properly done was in the team rounds, so I will keep my post focussed on that. So individually Rudra and Veer Managed to win the Bronze medal on their first attempt at an international sudoku championships, thanks to the crazy ranking system. Though I was 11th individually and Prasanna was 5th, we both ended up with silver medals. The top 4, Kota, Kwak, Rohan and Ken Endo, all ended up with Gold Medals... Go Figure!!!!!

Philippines had scored 320 and 700 in the two team rounds for a total of 1020 to take the Bronze medal at third place. We lernt that Japan had made errors in 3 of the puzzles in Team round 1 for a score of 160 and 900 for a total of 1060 points for the Silver Medal. Which means India had a whopping lead of 740 points after Round 1. If we had known this earlier, we would have slept peacefully on Saturday night. India had scored 900 and 660 for a total of 1560 points to win a historic Gold Medal at an international Sudoku Championship for the first time ever. It was an honor, privelege and matter of great pride to be part of the Indian team which created history. Sweeter was the fact that we managed to beat Japan by 500 points though we were one player short. Finally, I think it was fitting that Prasanna, Rohan and I were the team to get the Gold for our efforts in carrying the Sudoku Torch for India for so many years. So here is a shout out to the guys!!! 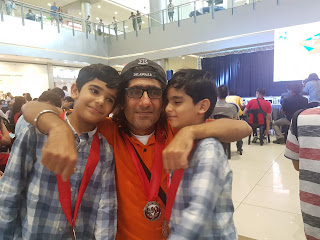 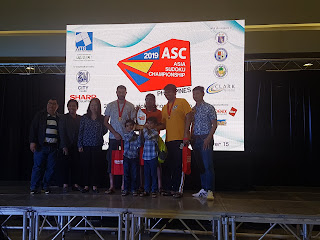 Coincidentally, when we reached Hyderabad, at the Immigration Counter, we found ourselves in front of the same officer who had wished the kids luck. He recognised us and asked the kids about the tournament. The kids proudly flashed their Silver Medals :D 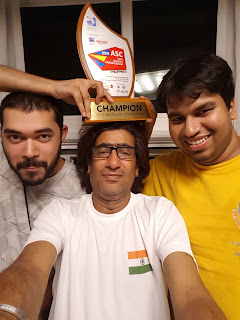 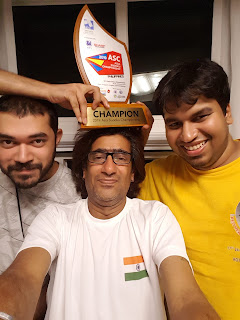 I would like to take this opportunity to thank the Organisers and especially the people of Philippines for the love and warmth shown to us.
Posted by Rishi Puri 2 comments: