Today we will tackle another variant which is expected at the Times Sudoku Championship this weekend.

Rules of Classic Sudoku apply. Additionally, No digit can repeat on any of the marked diagonals. 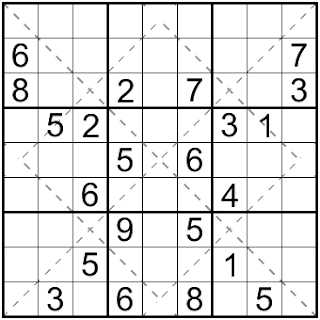 With the Times Sudoku Championship finals slated for this weekend, there were a few requests for an Odd Sum Sudoku. I managed to create an easy one as time is short. So have a go at it.

Rules of Classic Sudoku apply. Additionally adjacent cells marked in grey always will have digits whose sum is an odd number. 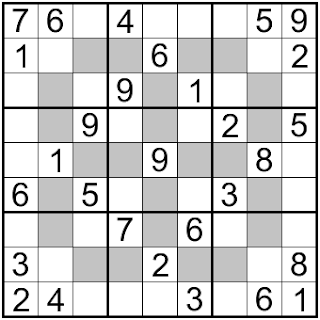 Ok, having done with experimenting on Trio sudokus, it is time to get back to normal variants. This is keeping in mind the Finals of the Times Sudoku Championship.

So today we have a look at a Non-Consecutive Sudoku. 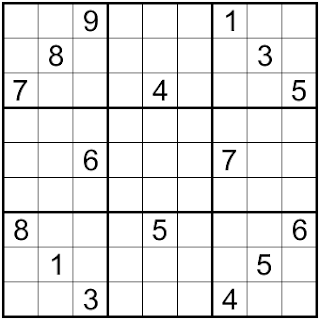 In continuation of twisting up the Trio, I decided to take it a step further. Thought why not try it with a Knights Non-consecutive constraint. This has turned out better than yesterdays twist. 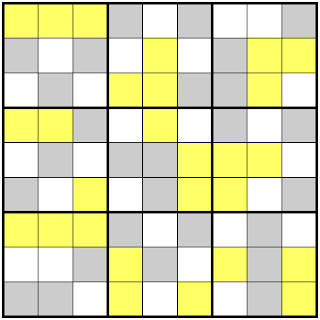 Trio Sudoku has always been one of the basest of Sudokus. Its like three different set of sudokus rolled into one. I was just sitting and wondering how I could make the three individual sets interact and decided to add the Non-Consecutive constraint to it. The result was quite pleasing and here is a Trio with a Twist.

Today we will try and tackle a Killer Sudoku. It is kind of hard getting into a mode of creating a sudoku daily after a long hiatus. Hope people dont find it too tough.

Rules of Classic Sudoku apply. Additionally, the number on the top left corner of the cage is the sum of all the digits in that cage. Digits are not repeated inside a cage. 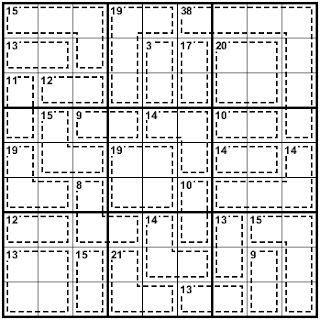 Well, Its time I restarted posting on the blog. With the regional rounds of the Times Sudoku Championship underway, 2 rounds have been completed and two more to be conducted over the coming weekend. Top 4 players from each region will take part in the finals at Mumbai on 3rd August.

Winning the Chennai round was quite satisfying on a personal front. Irrespective of the competition, I was more concerned with accuracy and my solving speed. Leaving nothing to chance I spent a whopping 7 minutes in round 2, checking to make sure that there were no errors or blank cells, mistakes which I have made plenty in the previous years. Was glad to see that no such issue had occurred and I had all correct. The final will be a different ball game altogether and I look forward to renew the battle with Rohan, and Prasanna now amongst the fore runners, its going to be an interesting battle. It bodes well for the Indian team if we all qualify as that would ensure a really strong Indian team at the WSC.

Todays puzzle is a bit tricky Diagonal sudoku. Lot of people found the Diagonal Sudoku in the Chennai round to be tough and asked me to post something related to Diagonal Sudoku. Please feel free to try it and if stuck do not hesitate to mail or ask me on the blog. 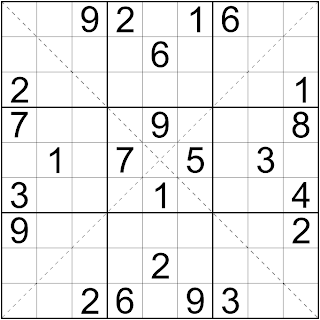