Today is an Anti-Knight Sudoku for the Daily league. Things have been hectic and hence the puzzle updates for blog have become infrequent. Soon there will be a news update for all so keep watching this space.

On the Daily League, we have had a splurge of great puzzles as always. I haven't solved any this week, but indeed to do it later this weekend.

Friday was Tom Collyer's 8 is still alive which was renamed as A Date with 8. I will take credit for that :)
Saturday was Bram's 10 Box Sudoku.
Sunday was Kwaka's Odd Sudoku.
Monday was Fred's Diagonally NonConsecutive Sudoku.
Tuesday was Prasanna's Galloping Horses.
Wednesday was Bastien's Figure Sudoku.

Rules of Classic Sudoku apply. Additionally, a number cannot repeat at a cell which is at a Knight's step, as in Chess, from itself. 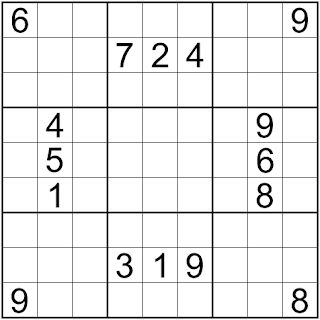