Today's puzzle is one of my favorite creations. I don't think I have spent more time on any puzzle than I have spent on creating this sudoku for the Daily League. I know I am putting up a sudoku once a week on the blog as against a daily puzzle but believe me that there is good news in the offing soon. :)

Today for the Daily League we have an Even Odd Skyscraper. Place numbers in the grid such that each row, column and 3x3 box contains the numbers 1 to 9. Each number represents the height of the skyscraper in each cell. The digits outside the grid indicate the number of skyscrapers seen from the corresponding direction. Shaded cells inside and outside the grid can contain only even digits. 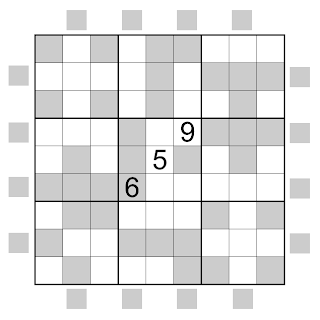