Today we have a Palindrome Sudoku for the Daily League.

Last week was good performance wise for me at the Daily League.

Last Friday was a Twodoku by Tom Collyer.
Saturday saw a Kid Sudoku by Bram, which was one of my favourites from last week.
Sunday was an Outside Sudoku by Kwaka.
Monday we had a Sum or Product Outside Sudoku by Min Young Joo.
Tuesday was Prasanna's Consecutive Sudoku.
Wednesday was Bastien's Irregular Sudoku, which I still have to solve.

Another big step for the League was taken with the help of Karel Tesar who manages the sudokucup.com website. The league puzzles are available online on their website for solving, so if anyone wants to try the puzzles online without having to print them, then sudokucup.com is the website you need to visit. :)

The rules of Palindrome sudoku are the same as a classic sudoku. Additionally digits along the given lines read the same when read from either direction on the line. 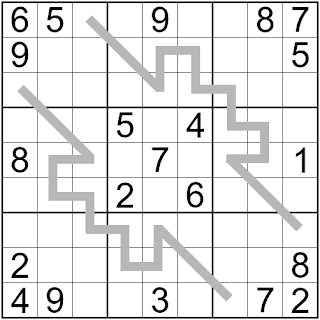